From royhills
Jump to: navigation, search

The text after the Could not bind message tells you which of these problems it is, and the sections below give details of each of them.

Installing ike-scan SUID root may introduce a security risk if it contains exploitable bugs. I am not aware of any such bugs, and I have taken care to avoid them, but there are no guarantees.

Using --sport to specify a port above 1023 does not work for all VPN servers, because some will only respond to source port 500. If you want to use a random high source port, you can use --sport=0.

Another Process is Using the Port 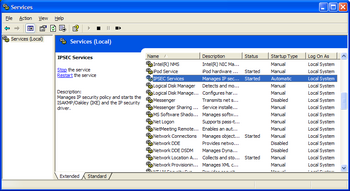 This means that another process on the system has already bound to port 500. This may be another instance of ike-scan, or an IKE server process.

To identify the other process, look for processes called things like ike, ipsec or isakmp. You may also be able to use netstat to track the process down.

Using --sport to specify an alternative source port does not work for all VPN servers, because some will only respond to source port 500. If you want to use a random high source port, you can use --sport=0.

The screenshot on the right shows the Windows XP IPsec service, which is an example of a process that binds to UDP port 500. To run ike-scan on Windows XP you need to stop this service or use a different source port.

If I double-click ike-scan.exe under Windows, a window appears but closes immediately 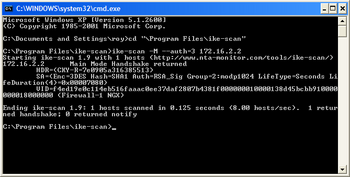 ike-scan and its associated programs are command line utilities. You must run them from the command line, not from a GUI environment.

The screenshot on the right shows ike-scan running on Windows XP using the cmd.exe command prompt.

The short answer is: upgrade to ike-scan version 1.9 or later.

The long answer is: this was due to the following debugging code that was included in ike-scan.c up to and including version 1.8:

This DNS lookup code did not change the operation of ike-scan, but it could introduce a delay on systems with no working DNS.

This code was never required for public use, and was removed from the code in version 1.9.

Why do I get a response if I scan the local host?

If you scan the host that you are running ike-scan from, you will receive a response that makes it appear that it is running an IKE listener. This is misleading; what is actually happening is that ike-scan is receiving it's own IKE packet and displaying it as if it were a response.

Here is an example: